THESE WORKS CAN BE HEARD, ALONG WITH HOFFMAN'S GUITAR / VOCAL     PERFORMANCES ON HIS YOU TUBE CHANNEL-  CLICK THE BLUE BUTTON ABOVE

Larry is currently composing. writing, and teaching guitar and music theory privately in the Baltimore area. His students--former and current--range from beginners to musicians and composers who record and perform professionally. As an educator he has lectured nationally, and taught courses in the history, theory, and practice of music both in the classroom and on a private basis. He served on the faculties of the Peabody Institute, the Johns Hopkins Evening College, Johns Hopkins University,  and the Goucher Center.  He has been a consultant and lecturer at the Smithsonian Museum Of American History, the Chicago Blues Festival, the Pocono Blues Festival, The Juneteenth Festival in Houston, TX; and The Mississippi Valley Blues Festival, beginning in 1997. In March, 2008, Hoffman was nominated for a United States Artist Fellowship, and in 2020 was inducted into the Maryland Entertainers Hall of Fame. In 2020 Hoffman's blues and folk-inspired compositions were made a part of the Blues Archive at the University of Mississippi. (See the "Press" tab above for details.) 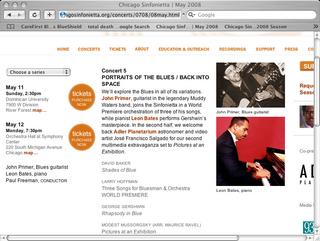 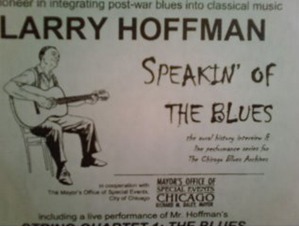 In 2007, Hoffman was commissioned by the Chicago Sinfonietta Orchestra to compose Three Songs For Bluesman And Orchestra, a groundbreaking work setting lyrics of three songs by bluesman John Primer, former Muddy Waters' band-mate, who sang and improvised, fronting the orchestra under the direction of Maestro Paul Freeman

This work was premiered at Dominican University on May 11, 2008 and repeated the next evening at Symphony Center in Chicago. The Chicago Sun-Times had an interesting take on the style of the piece. 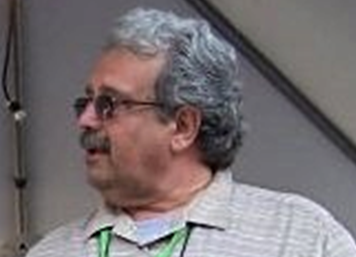 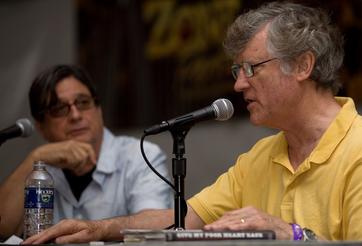 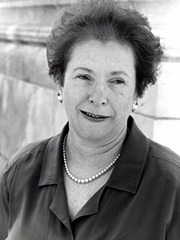 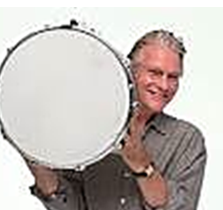 Later, he studied with W. Spencer Huffman, Ray Elam Sprenkle, and Robert Hall Lewis at the Peabody Conservatory of Music, earning Bachelors and Masters degrees in Theory and Composition. While at Peabody he was awarded the Gustav Klemm Award and the Otto Ortman Prize for compositional excellence and received grants from the Fromm Music Foundation at Harvard and the American Music Center. His private music teaching remained a focus throughout this period.

He joined the Peabody Institute faculty to teach courses in guitar, music theory, jazz improvisation, and music history. During his tenure he also served as Co-ordinator of the Visiting Composers Program, Co-chairman of the Preparatory Theory Department, Director of The Arts Expansion Program, and Creator / Director of one of Peabody's first Jazz Programs.

During this time he was also teaching selected courses in the history of classical music, jazz, and blues at the Johns Hopkins Evening College and the Goucher Center. He has lectured nationally on his music and on his blues projects at various venues including the Music Teachers' Seminar at the University Of Mississippi, the Smithsonian Museum of American History; Johns Hopkins University; the Delta Blues Museum in Clarksdale, MS; Central College in Houston, TX; and at music festivals in Chicago; Mississippi; Texas; New Jersey; and Pennsylvania.

From the time he returned to Baltimore Larry has been active as a private teacher of guitar, music theory, improvisation, and blues and jazz history. 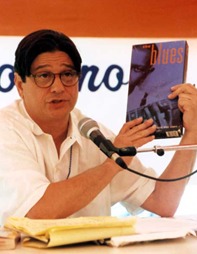 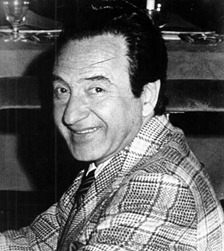 He began producing blues records in the early 1990's and was named Living Blues' "Producer Of The Year" in 1997, most notably for the first recordings of 2008 MacArthur Fellow Corey Harris, whom Hoffman discovered and recorded in 1994. Fish Ain't Bitin', his second effort with Harris, won nearly ten awards, and was named Acoustic Blues Record Of The Year, garnering artist and producer a W.C. Handy Award. Other of Hoffman's productions include CD's by Chico Banks, Freddie Roulette, Reggie Wayne Morris , and John Weston. Songs from Hoffman's CD's have been used in shows such as "The Big Easy" (USA Network), and "Lost" (10/18/07 ABC-TV). 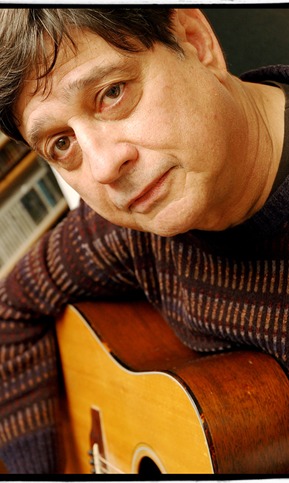 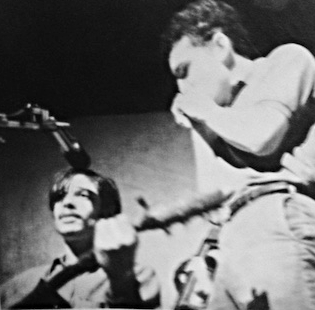 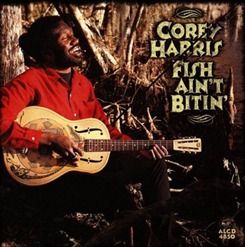 He left Academia and returned to the blues--this time as a writer, contributing feature articles, columns, and reviews to publications including the Baltimore Sun, the Baltimore City Paper, Living Blues Magazine, Guitar Player Magazine, the All Music Guide, and the King Biscuit Times.  He also composed liner notes for many recording companies both in the US and abroad.

Larry was Grammy-nominated for his notes to Mean Old World: The Blues From 1940-1994 which he compiled and co-produced for the Smithsonian Institution Press. Most recently, he was the chief liner- note -writer for the double Grammy-winning collection, Martin Scorsese Presents the Blues. He was named Living Blues Magazine "Liner Note Writer Of The Year," and "Best Compiler Of A Historical Compilation." In 2020, he contributed essays to the Document Records project:"Searching for Secret Heroes," a package that included Sam and Ann Charters' long-lost,  iconic 1962 documentary: "The Blues." 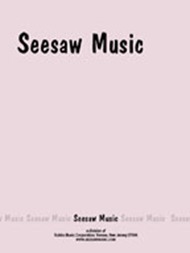 After returning to the East Coast, he undertook intensive jazz studies in Philadelphia with legendary jazz educator Dennis Sandole, the teacher of John Coltrane, while working jazz and blues bands in Baltimore. During this time he began a private music studio where he taught all styles of guitar as well as music theory.

Larry Hoffman started his musical career in his teens as a self-taught folk singer/ guitarist / songwriter, playing open mic's in his hometown of Baltimore, MD, with a repertoire that included traditional folk, old-timey, bluegrass, ragtime, blues, and originals.

At 19, he landed his first professional gig at the Blues Bag in Provincetown, MA, opening for artists such as John Hammond, the Jim Kweskin Jug Band, Tom Rush, Doc Watson, and blues legend Skip James . A year later, he moved to San Francisco, where he gigged regularly at many clubs including the Blue Unicorn and Coffee Gallery, while jamming around with such artists as harp legend Sonny Terry, singer/songwriter Loudon Wainright III, famed harpist Charlie Musselwhite, and acclaimed sideman, pianist Alberto Gianquinto. 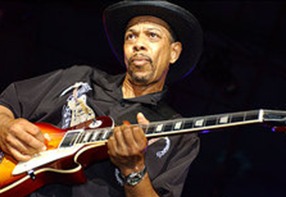 Later that week in May, 2008, Hoffman was featured at Chicago's Harold Washington Library on May 9, as part of the "Speakin' Of The Blues" series, which featured an interview of the composer by Chicago's Special Events Director Barry Dolins, along with a performance of Hoffman's String Quartet #1: The Blues -- a program appearing in rotation on Chicago cable television. 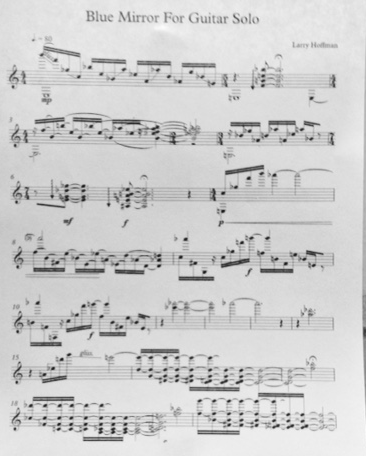 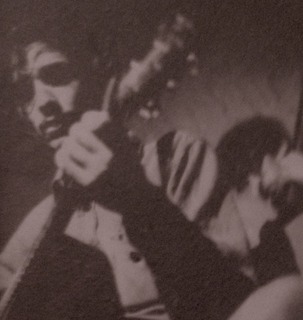 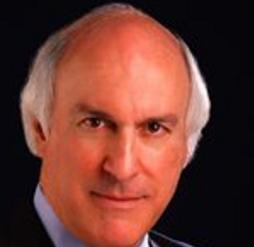 As a composer he has been a pioneer in integrating post-war blues into classical music. Members of the Cleveland Orchestra , including renowned oboist John Mack and acclaimed harpist Yolanda Kondonassis, recorded and performed his Blues for Harp, Oboe, and Violoncello; and his String Quartet No.1: The Blues was premiered at the Smithsonian Chamber Music Series in Washington, DC.  "This transition from blues was brought about in part by the badgering of three great friends: Lynn Hebden, my first Dean at the Peabody, John Locke, my great friend over many years, and percussionist of the Baltimore Symphony, and a visual artist and poet whose name should remain private," Hoffman relates. "In addition, Barry Dolins, formerly of the Mayor's Office in Chicago, and founder of the Chicago Blues Festival (and featured in the video on this site --see the button above for "MY MUSIC") was also extremely encouraging both on the blues and compositional fronts. The incomparable Dr. William Ferris, then chairman of the NEH, was the first in the blues field to encourage my work incorporating blues into classical music. He said this in person, on radio, and in print. Samuel Charters, internationally known author, record producer, and historian was also very encouraging, and visited me to conduct an interview regarding my blues-oriented compositions. That was revelatory to me.  It did take a lot to convince me that I could actually accomplish this!  In addition, my old friend, Ron Becker-- whom I knew in high school and then again at UVa, and again -- years later--- when he had become Assistant Director of the Smithsonian Museum of American History---who was instrumental in bringing my work--as an historian, writer, and composer--- to the Smithsonian's attention.  That led to some wonderful opportunities."

The Chicago premiere of Hoffman's music was in May, 2006, when this string quartet was performed at Preston Bradley Hall in the Chicago Cultural Center by members of the New Millennium String Quartet and Eighth Blackbird. Hoffman's music has been performed stateside in the District of Columbia, Maryland, New York, Mississippi, Illinois, Pennsylvania, Ohio, Colorado, and New Jersey; and received its European premiere in Sweden in 2008, when the Weber String Quartet performed this work on multiple occasions. 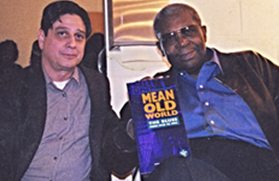 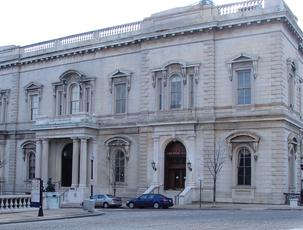