Larry Hoffman is an interesting guy. According to booklet notes, he is nearly entirely self-taught as a musician and composer. He began as an English major in Virginia and banjo player who admits a love for bluegrass, Delta “blues”, Bob Dylan and so forth. He followed some jazz as well and learned how to write/make up his own songs.

His music is equally interesting and mostly fun to listen to.  There are moments in each of these works that venture into some somewhat unusual territory, harmonically and melodically, but the basic, typical “blues” feel returns quickly.

I thought the strongest work in this collection is Pages of Anna for harp, flute, oboe and clarinet; perhaps because it is the one that strays furthest from the straight up blues format with some really exotic and wonderful meandering harmonies and melodies that bounce playfully from instrument to instrument.

The other works are nice and make for pretty easy listening. The String Quartet #1,Blues for harp, oboe and cello and the Blues Suite for solo cello are all pleasant enough laid-back works but do have a sameness in tone among them; that is ‘blues, blues and some more blues.’  Again, that’s what they are supposed to be, after all.

Colors for trumpet and percussion offers some of the same out-of-context feel as I got with the Pages of Anna. There is some angular writing in both instruments and a bit of an improvisatory feel here that is rather attractive.

I enjoyed this album, in general, but I do think that if you like the blues then those pieces which are so clearly “blues” (like the Blues trio or the cello Suite) will appeal to you the most. For those wanting something more, than certainly Pages for Anna and – maybe – Colors will intrigue.   Larry Hoffman’s music strikes me as something that meets a niche audience; neither ‘pure blues’ nor ‘modern music’ enthusiasts per se; but it does fill a bill. It’s not quite my deal but I do admire the creativity and the unique character. I would be interested to hear more of Hoffman’s “non-blues” output.

" Hoffman...— known  as a musician and educator—certainly integrates the classical and blues genres with moxie and might.  Bringing to mind Bartok’s folk-inspired works, Hoffman integrates blues elements that swing sturdily ...to quicken the pulse and fortify the soul.  Having these seemingly disparate genres combined with such joy and gravitas makes Hoffman sound downright visionary." 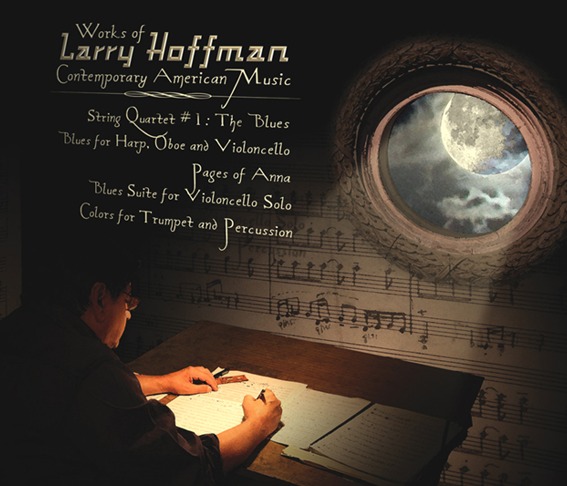 This is the first CD devoted to my compositions. The works include  my first string quartet; a blues-inspired  trio for harp, oboe and violoncello; a blues suite for solo cello; a duet for trumpet and percussion; and a work composed for harp, oboe, clarinet, and flute (rendered here as a computer realization masterfully worked by award-winner Goeff Knorr. )You can purchase the CD for $16 (USD)  by sending a check or money order directly to Larry Hoffman;  928 N. Charles St,; D-1, Baltimore, MD, 21201, OR by using the Paypal option. FREE SHIPPING for domestic sales.

This collection of chamber music reflects this composer’s professional experience in the genres of early country, folk, and blues, as well as his formal training in both jazz and classical music.

Former NEH chairman William Ferris calls Hoffman’s work “an important new chapter for American music,” and this sentiment is echoed in many of America’s music periodicals.  Living Blues Magazine cites these works as “outstanding…carefully crafted gems of modern American music…the most successful exploration of blues aesthetic through the classical music lens.”  Baltimore Magazine likens Hoffman’s work to that of Bartok, calling it “visionary….combining these seemingly disparate genres with joy and gravitas.”  Downbeat Magazine cites Hoffman’s “integrity and compositional acumen,” praising his Blues Suite for Violoncello Solo as “a triumph for composer and cellist.” The Baltimore Sun notes Hoffman’s “subtle writing and keen sense of rhythmic motion, characterizing Pages of Anna and Colors for Trumpet and Percussion as “lyrical and moody, filled with imaginatively developed ideas.”  The American Record Guide praises Hoffman as a “composer with inspiration and remarkable ability to put across the blues style in classical terms.”  He calls the Atlantic String Quartet’s performance of String Quartet #1 as handled with “expertise and conviction,” and Kristin Ostling’s rendering of Blues Suite for Violoncello Solo as “inspiring,” calling all of these performances “engrossing…performed with conviction and polish.”

Baltimore composer and former Peabody Conservatory faculty member Larry Hoffman never lost his roots in the nonclassical arena, especially his affinity for blues. His String Quartet No. 1 is a big score with a kinetic beat, and gets a hearty performance from the Atlantic String Quartet. The often subtle writing in “Blues for Harp, Oboe and Violoncello  is warmly explored by a stellar lineup that includes the late oboist John Mack of Cleveland Orchestra fame, and BSO cellist Kristin Ostling offers a gutsy account of the solo “Blues Suite,” a straight-ahead use of the genre’s idioms. If there is anything bluesy in the other pieces on the recording, it may only be imagined, but the composer’s keen sense of rhythmic motion remains. “Pages of Anna” (in a cool computer realization) and “Colors for Trumpet and Percussion” (featuring the BSO’s Andrew Balio and percussionist David DePeters) are lyrical and moody, filled with imaginatively developed ideas.

“Blues journalist and record producer Hoffman has the integrity and compositional acumen to raise awareness of how classical compositions can support a blues sensibility without coming off stilted or contrived.  His “String Quartet #1: The Blues,” performed by the Atlantic String Quartet, breathes and flows interestingly for more than fourteen minutes.  “Blues Suite for Violoncello Solo” [is] a bunching of five short incantations of bluesy ache and solace--a triumph for both the composer and the virtuosic cellist Kristin Ostling.” 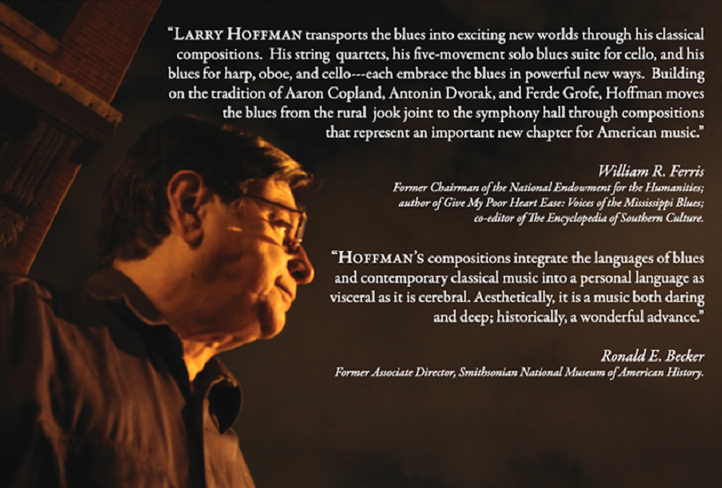